Chapter 3 – What type and where would we build nuclear power plants in Australia? 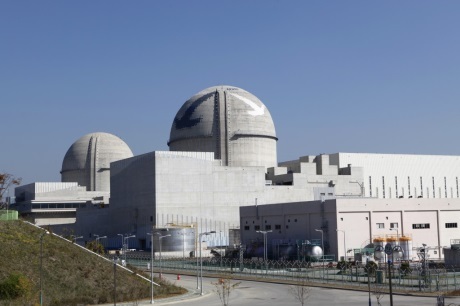 03 Mar Chapter 3 – What type and where would we build nuclear power plants in Australia?

This is the third of a three part blog which looks at a plan for real carbon reductions in Australia’s electricity generating system.

Part 1 dealt where Australia’s greenhouse gas emissions come from, what our targets      should be. It can be viewed at:

In Part 2  we looked at how we can achieve these very low emissions in the electricity sector using nuclear energy. This can be viewed at:

Possibly the most reliable current supplier of new nuclear power plants is found in South Korea. They are a close trading partner and have a well established nuclear supply chain. The plants envisaged in this plan are the current generation of pressurised water nuclear fission plants such as those at Shin Kori. Their ability to operate internationally is seen with the nearly completed 5.6 GW of nuclear plant in the United Arab Emirates – one of the harshest construction climates imaginable. 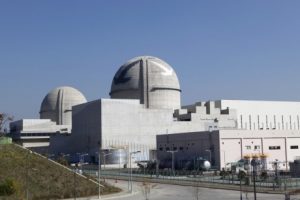 In the future we hope that lower cost plants will arrive. These could be small modular reactors or advanced high temperature gas reactors for example. The challenge of climate change however is here and now and we need to get on with the job. The tools exist and have been proven in the laboratory of real life.

Typically, ideal sites for nuclear power plants are adjacent to the coast on hard rock foundations where sea water provides cooling. It should also be close by an existing transmission grid, port and transport facilities. If constructed inland, a reliable source of water for cooling should be available.

It’s clear that many parts of Australia do not have a transmission system capable of supporting a disbursed fleet of medium sized nuclear power plants. We did not have a suitably sized grid when the current fleet of coal fired plants were built either. Our vision should not be restricted to just the next ten years or so. This nuclear fleet will be around for the best part of a century and grid augmentation will be required for all new energy systems.

3.    State wide regions of Interest
In each of the mainland states which contribute to our National Electricity Market we have identified regions which have features that make them suitable for the construction and operation of nuclear power plants.

Given its central position in the NEM, New South Wales could host around 10 of the nuclear power plants

Within New South Wales suitable regions could include: 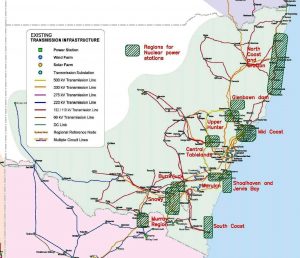 Victoria would ideally host at least six nuclear power plants with four in the LaTrobe Valley using the existing transmission grid, transport and cooling resources. Two could be considered around Portland supply energy to South Australia, the local aluminium smelter and via the dual 500kVa transmission line into Melbourne. A site at Portland would be located on rock foundations and use seawater cooling. Other sites that are worth investigating are South Gippsland and Cape LipTrap on the coast. 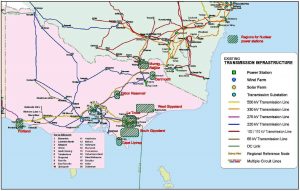 Queensland could host at least 5 nuclear power plants however the state is more problematic as its grid does not contain significant 500KV transmission lines. Regions to consider would be around Tarong, Swanbank, Callide, Wivenhoe and Gladstone with its heavy concentration on energy and resources. 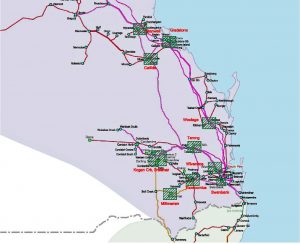 For nuclear power plants to be viable in South Australia they would need to be either small modular reactor types or, if large units the transmission line through to Victoria or New South Wales would need to be significantly enlarged.

Regionally, suitable sites would exist near Port Augusta, Crag Point or near Kadina or the Fleurieu Peninsular A nuclear powered economy provides long term low cost low carbon energy. This has been demonstrated in the laboratory of real life in major OECD economies such as France, Sweden, South Korea and Japan.

Only Australia has laws preventing its use.

No nation has yet reduced its emissions to the levels required to address global warming using wind and solar nor has any nation shown a promising path to achieving those levels.

Only nuclear energy has the runs on the board.