The Grid and the Big Costs

Impact of Renewables on Transmission

Transmission and distribution currently make up the largest share of our electricity bills. In NSW its of the order of 45% while in SA its around 68%. Our analysis shows that going to 100% renewable energy with wind and solar could see this component at least double in cost.

The following two images explain why. These are simplified conceptual diagrammes designed to illustrate the relative strengths and costs of the transmission and sub-transmission system.

In the first image we have our existing system with no Renewable Energy Zones (REZs). In NSW the largest load centre of Sydney is closely coupled via a high capacity grid connection to large generators such as those in the Hunter Valley.

Energy flows via lighter links to moderate load centres such as Canberra or even lower loads such as Dubbo.

Energy can also flow from the existing Snowy Hydro back to Canberra and Sydney to provide important synchronised power to meet fluctuating demands. 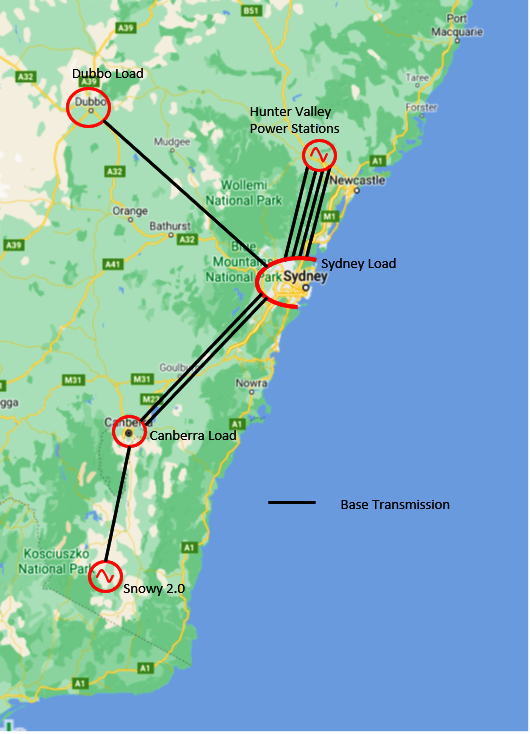 In summary this is a consolidated grid that distributes energy from existing baseload power stations.

In the second image we now have Renewable Energy Zones powering the grid. Many of the existing high capacity links are now redundant and are a lost asset. Taking their place are new high voltage high capacity links to regional REZ’s such as Dubbo shown in pink.

These new links and associated substations will be sized to carry the maximum generation capacity from each REZ even though the generators in the REZ’s have low capacity factors in the region of 25 – 35%. The links will also be more than twice the length of our current connectors. Dubbo is 310km from Sydney, Armidale is 360km while Bayswater coal plant is only 160km. 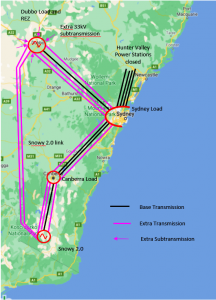 The new grid will need to carry far greater amounts of power (megawatts) over longer distance (kilometres)The measure of (MW.kM) goes up hugely as does the cost of installation.

More energy will travel over greater distances and it will be very costly. We recently saw a massive blowout in the Humelink project to Snowy Hydro 2.0. Transgrid now expects HumeLink – a 500-kilovolt line connecting Wagga Wagga, Bannaby and Maragle – to cost $3.317 billion, up from $1.35 billion estimated in January 2020.

But that’s not the only cost increase. At each REZ we will have an additional buildout of 33kV sub-transmission. This will link all the new renewable energy generators to new substations linked to the main transmission. This sub-transmission will be costly because it will be operating at the same low capacity factors of the wind and solar.

The rush to Renewables is very high risk. There is low confidence in any of the announced costs associated with the reconstruction of the new transmission grid and no nation has so far created a low cost low emissions system that’s totally reliant on wind and solar.