Western Australia is our largest state with a land area of 2,529,875 square kilometres. It has around 2.6 million people, or 11% of the national population. With its  small isolated population and without any grid connection to the remainder of the nation it has unique challenges in establishing low carbon generation.

Firstly, the state generates electricity in three system, none of which are interconnected. Two of these systems produce 53.5% of the State’s electricity. They are the diversified group of remote communities and resource projects plus the North West Interconnected system. These are fueled by methane burners and petroleum products.

The third and largest single market in Western Australia is the South West Interconnected System (SWIS) serving ninety two percent of the population which is concentrated in the south west corner.

This system is the subject of this discussion

The three systems in the state generated a total of 43.6 TWh[ii] of electricity in 2020. Approximately 17.5 TWh of electricity[iii] or about 40% of the state’s total was delivered by network generators on the SWIS while the remaining 6.5% came from roof top solar PV.

Peak and Minimum demands are:

The approximate generating capacity in 2021 is listed in Table 1

The Challenge  and Performance of Renewables

The major aim of renewables is to reduce emissions in a robust manner and to do it at a reasonable cost. In 2021 the electricity generated on the SWIS came from methane burning with 34% and coal with 44%.

Historically wind energy started in WA in around 2006 and solar somewhat later in around 2012.  After nearly two decades their effectiveness in decarbonisinng the energy supply has not been significant.

As the following image shows, if we assume zero fugitive methane losses from the state’s methane burners, the electricity emissions intensity is around 540 gr CO2/kWh. Adopting a more realistic value of fugitive methane losses of say 2.5% then the emissions intensity is around 650 gr CO2/kWh which after nearly two decades is an appalling outcome.
France for example decarbonised its electricity system in about 22 years. 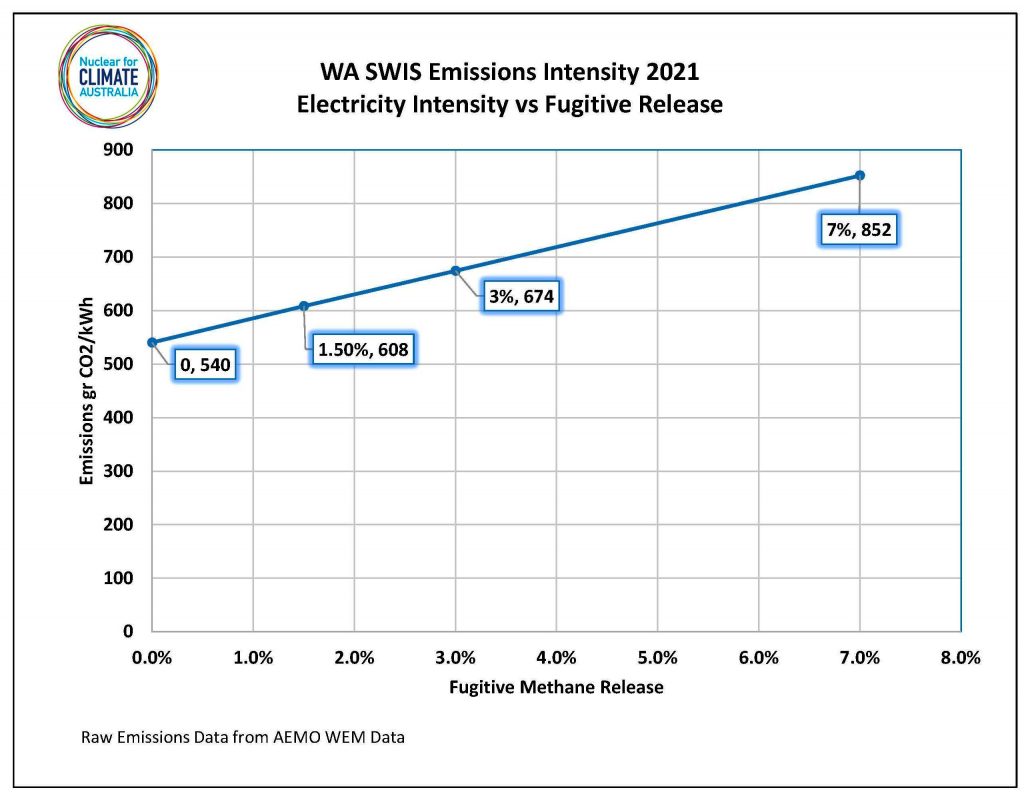 Modelling for AEMO’s March 2019 Report into integrating renewables found that without new technologies, the SWIS was at risk of failure as the level of minimum operational demand approaches 700 MW. Voltage and system strength limits are at risk below the 700 MW threshold where demand must be met entirely by utility-scale synchronous generation such as gas and coal.
These levels are now getting very close with the following image showing that a level of 912MW was reached on the 1st January this year. We also show that on the 28th December 3,641  MW of power was required in the shoulder period. This underpins the need for at least 4,000MW of reliably dispatchable generation to address peak loads.

7 day operational demand plus solar on the SWIS

Small Modular Reactor Option
A small self contained grid such as the SWIS is suited to a fleet of smaller reactors in the sub 300MW class such as General Electric’s BWRX 300 SMR. A fleet would overcome the impacts of refuelling or reactor trips and would mean that the grid would require less extensive upgrades and energy storage can be avoided. 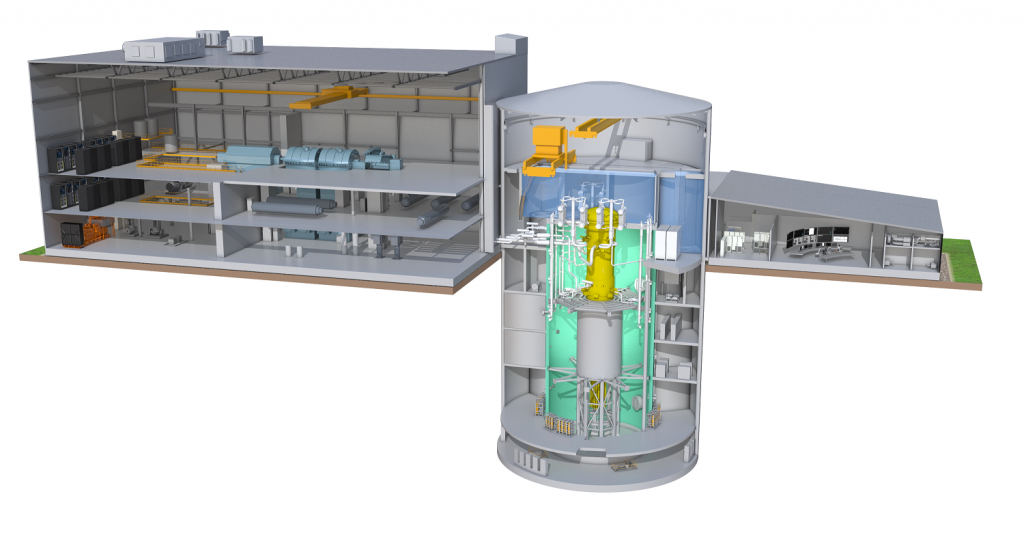 Concept for Small Nuclear Power Plants (SMR’s) on the SWIS

Key issues that affect the amount of capacity for each type of generator are:

Tabulation of System performance where nuclear energy is included

Locations for small nuclear power plants on the SWIS

Tabulation of small nuclear power plants on the SWIS

The emissions levels achieved by using seven small BWRX 300 nuclear power plants combined with solar PV and gas will drop from the existing levels of about 540 gr CO2/kWh to about 139 gr CO2/kWh.

The system still has 19% of energy coming from peaking open cycle fossil burning methane plants. The following image shows the comparative benefits of including nuclear energy compared with the current system.
Its highly desirable to achieve emissions intensities below 50 gr CO2/kWh to meet the challenge of man made global heating.

Options to achieve this target on the SWIS include: 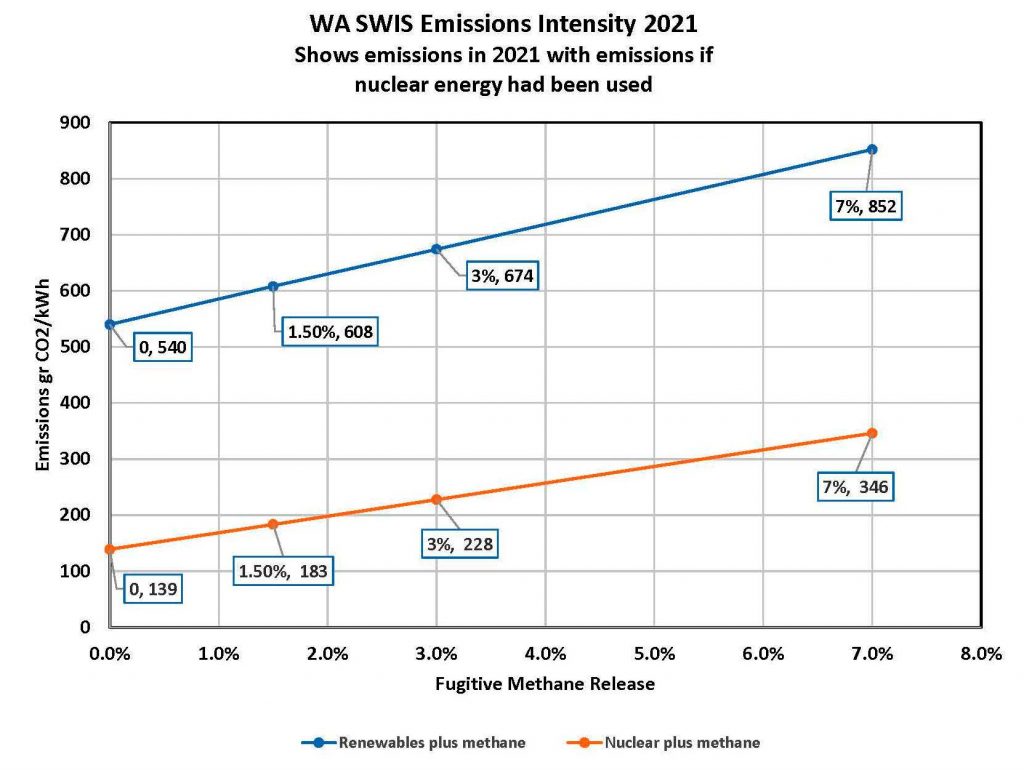 In Western Australia coal fired plants were constructed adjacent to available coal mines and other infrastructure.
New nuclear plants will where possible take advantage of the resource used for cooling at these plants.
In an effort to reduce the environmental impact upon inland water resources, modern nuclear power plants are being designed to use a hybrid system of air and water cooling. During periods of low water availability the degree of air cooling can be increased though at a modest reduction in power output.
At coastal plants such as those in the Geraldton, Perth and Albany regions, sea water would be the sole form of cooling.

While recirculating systems don’t add heat to the river or lake, they do consume water through evaporation. In Western Australia the availability of sizeable inland rivers are limited and so to overcome issues surrounding temperature rises in inland locations  mechanically driven systems known as  hybrid and recirculating systems can be used. These are now the only option used in the United States under their EPA guidelines.