Queensland has a very long  high voltage transmission grid that extends 1,700km from north of  Cairns to the New South Wales border.  Apart from the populated south east corner and the industrialised Gladstone region this long grid feeds a state with a low population density. This very long delicate grid presents challenges for the state and excellent opportunities for the adoption of smaller nuclear power plants.

A 500kV transmission network is being introduced in South East Queensland. Note that one 500kV power line is capable of carrying about the same amount of electricity as three 275kV transmission lines, with a much smaller land use requirement.

The Queensland grid and regions for nuclear power plants

The following two images show the Queensland grid together with regions that could host nuclear power plants.

Queensland Generating Capacity and Output in 2021

Queensland is Australia’s most energy hungry state on a per capita basis. Currently 81% of electricity generated in that state comes from fossil fuels. Even with proposed renewable energy projects the actual CO2 emissions intensity will only reduce marginally because of the poor capacity factors of wind and solar generation and the backup required from gas plants in particular.

The generating units at coal fired plants such as Stanwell, Gladstone and Callide are not especially large being in the range of 350MW to 450MW and are matched to a 275kV transmission system. The capacity of these systems is shown for 2021.

Total electricity generating capacity in Queensland in 2013-14 was 13,873MW which generated 64TWh of gross electricity production[ii].

In 2021 the installed capacity has increased significantly to 19,421GW however actual output has dropped to around 62TWh which is symptomatic of renewable energy increases.

Based on Queensland’s proportion of generation the two routes would see:

The need to address global warming with nuclear energy is immediate. Larger 1GW  scale reactors are currently available to be  used in the south east corner of the state. However this would require grid capacity to be increased to incorporate 500kV transmission lines. Large reactors can also be used within the industrial region of Gladstone to meet the demands of the LNG plants and aluminium refineries however this would also require grid upgrades to the south east region to ensure robust supply during refuelling and reactor trips.

In Queensland’s long grid an ideal option would be to go down the small nuclear power plant route with 300MW units.

In the following image and tabulation locations for some 40 small nuclear power plants could be constructed at eleven different sites while only 28 are in fact required. 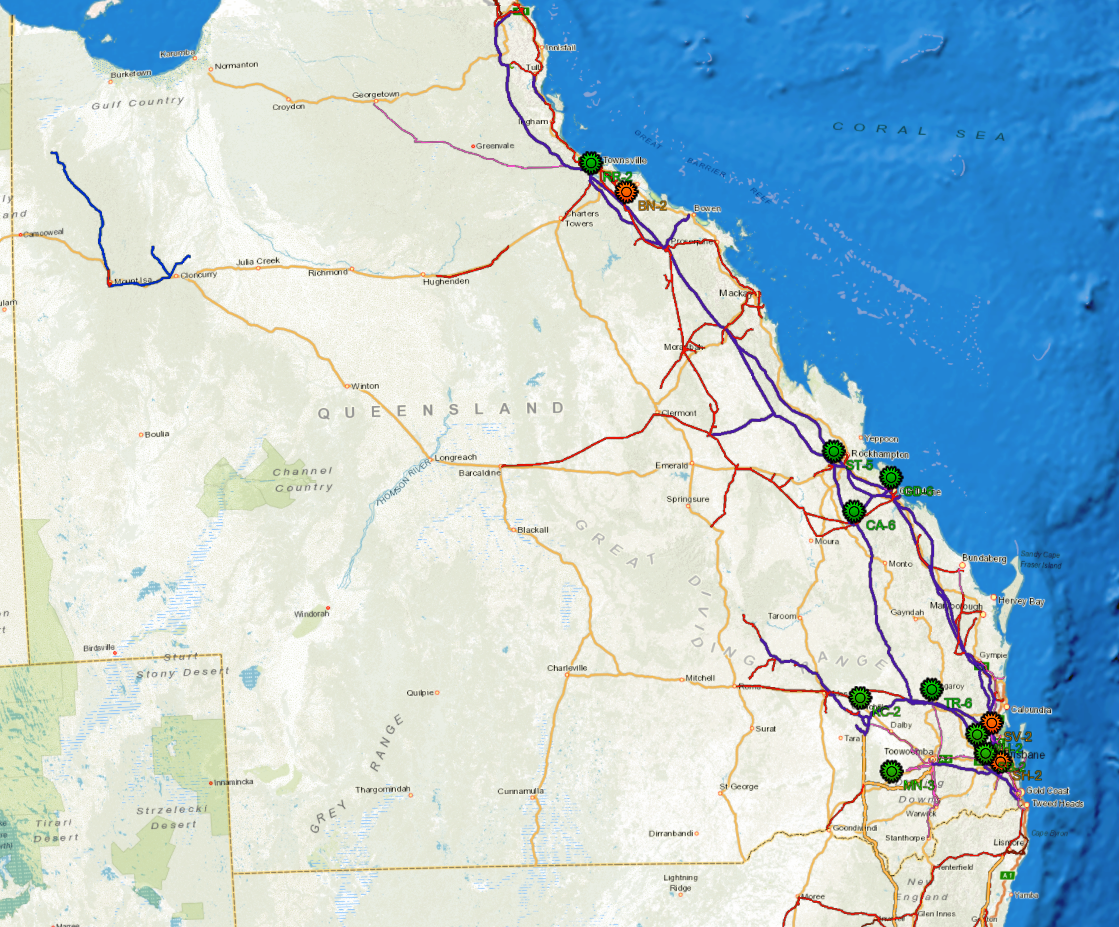 In Queensland coal fired plants were constructed adjacent to available coal mines and other infrastructure.
New nuclear plants will where possible take advantage of the resource used for cooling at these plants.

At Townsville and Gladstone sea water cooling will be used
In an effort to reduce the environmental impact upon inland water resources, modern nuclear power plants are being designed to use a hybrid system of air and water cooling. During periods of low water availability the degree of air cooling can be increased though at a modest reduction in power output.

To overcome issues surrounding temperature rises in inland locations cooling towers or mechanically driven systems known as  hybrid and recirculating systems can be used. These are now the only option used in the United States under their EPA guidelines.

While recirculating systems don’t add heat to the river or lake, they do consume water through evaporation. In Australia the availability of sizeable inland rivers are limited though a number of large reservoirs such as Wivenhoe Dam provide a substantial resource for fresh water cooling.