Outline of a Clear Direction

This page gives an outline into a clear plan for nuclear power generation in Australia. The following pages will look at renewables and nuclear on our electricity grid, we’ll look at the economics, the types of nuclear plants for Australia and where we could build them and how long it would take.

Our research and plan shows that at least 76% of electricity generated on the National Electricity Market would come from nuclear power plants located on our existing grid. The remaining generation would come from solar PV providing 17%  and existing hydro power with 7%.

Our plan uses detailed analysis of the whole of system impacts of energy generation to arrive at the System Levelised Cost of Energy or SLCOE.

It is true that wind and solar are lower cost generators at their points of connection to the grid than nuclear energy. Many people therefore base their case for wind and solar (renewables) on their low Levelised Costs or LCOE’s
The case for renewables however fails however when we try to integrate them into a grid to provide useful energy 24/7. We must add storage and lots of it. Maybe that means batteries and/or pumped hydro, either way its expensive.
It also means that at 100% electricity generation we need a lot more transmission – maybe two of three times that of our existing grid. That is currently the highest component of our electricity bills. Renewables will cause the highest cost parts of our electricity bills to at least double.

There are at least two other major costs of high levels of renewable generation.

Firstly there’s the costs of ancillary services. The need for these is made more critical by the use of renewables especially at high levels of penetration. These are the costs of equipment that provide voltage and frequency stability, black start capability, system strength, fault current, inertia and fast frequency response. Some of these can be synthesised by modern power electronics in batteries and renewables. Some like system strength, inertia and fault current rely on machines with real grunt and that’s what large synchronous generators at nuclear power plants of hydro station are able to provide.

Secondly there’s the costs of spilled energy. In simple terms, a system using 100% renewables has to work 24/7 but the amount of PV energy generated in summer will be about twice that of winter and so there’s a huge overbuild required to meet the winter load. Wind suffers similar problems.

In June 2017 less than half the wind energy was generated compared to June 2016 despite more wind farms being in operation and so large amounts of overbuild or hugely expensive storage capable of seasonal energy transfers at grid scale are required. Europe has suffered this year through huge energy prices driven in part by a wind drought creating greater demand for gas. This has resulted in  the general price of electricity increasing in Europer by over 230% in the last year.

Our analysis shows that spillage of the order of 30% or more will occur at 100% renewable power generation and the cost of this will not be limited to the renewable generators alone. It will be flow through to transmission and ancillary services overbuild. 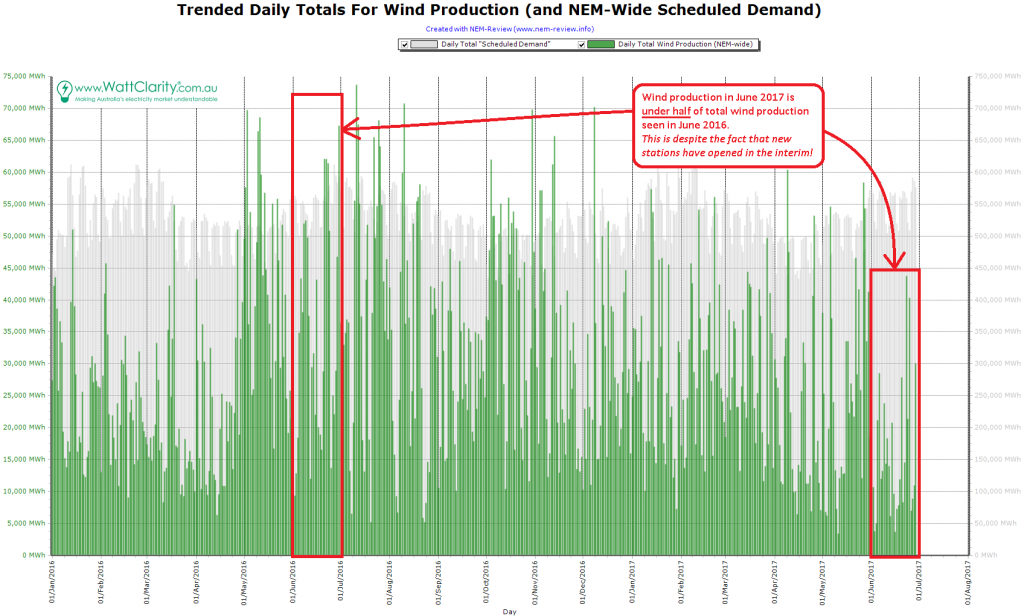 As a result of the unreliable nature of wind energy no wind power is used in our energy plan. We have headed Europe’s problems.
Firstly it is uneconomic because  it relies on large amounts of storage  and secondly it maintains the use of gas powered fossil fueled power plants which increases greenhouse gas emissions

The plan uses the resources required for a fleet of nuclear plants to provide a very significant proportion of Australia’s electricity using a national campaign of construction similar to those carried out by France, Sweden and South Korea.

Now is the time. We have the Reactors

The time for effective action is urgent and so the plan uses nuclear power plant options.
We can use 24 gigawatts of the emerging small nuclear power plants such as the BWRX 300 from GE Hitachi or we can commence the build out in selected locations using known licensed large scale reactors that are currently available such as the APR 1400 from South Korea.

These would be constructed at multiple sites. The plan is essentially a feasibility study of what such a nuclear energy powered future looks like, how it would be scheduled with financing options and will include public engagement..

Previous reports such as those of UMPNER and Gittus pointed the way and this study will:

Back to - Home
Forward to - The Analysis