Why Don’t we Demand Zero Emissions, “Always On”, Affordable Power? 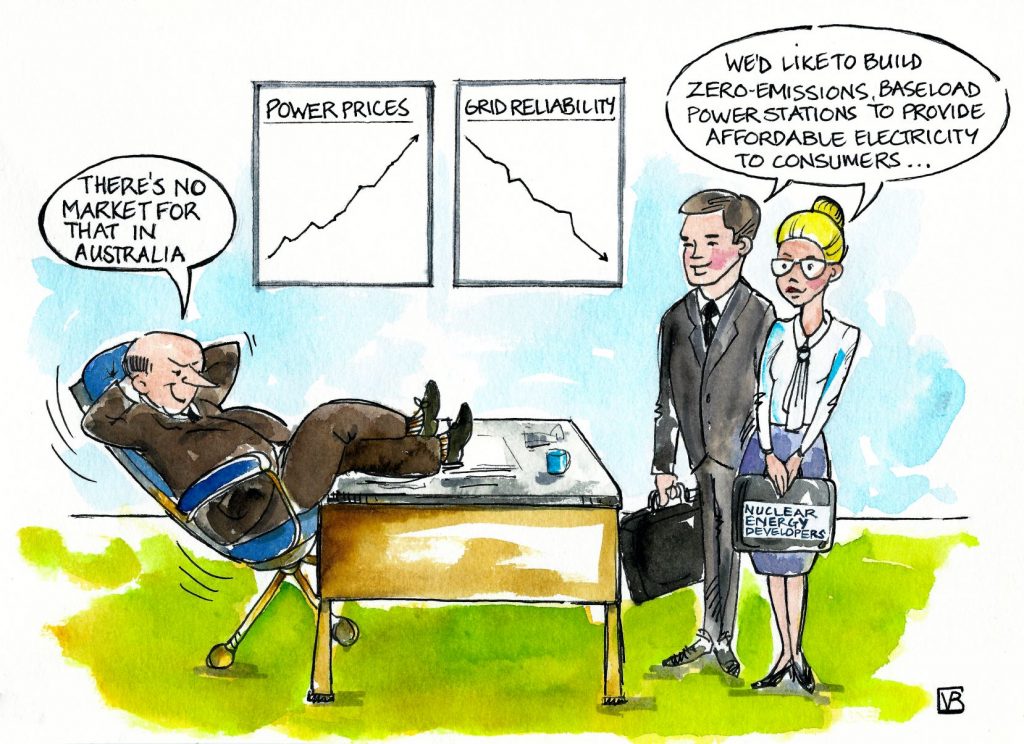 This article by James Fleay of DUNE – Down Under Nuclear Energy looks at investment in nuclear energy on the National Electricity Market.

Like many advocates for nuclear energy in Australia, my colleagues and I believed that if the Federal Government would only repeal the ban on nuclear power, business or state governments would eagerly build nuclear power plants (NPPs) to rapidly cut emissions, reduce power prices and improve network reliability. In fact, this belief prompted the creation of DUNE a company formed to study the investment case and present the facts to politicians and power market participants.

After all, being thus informed, they would hasten to repeal said law…right? How wrong we were.

The federal ban is only the first challenge to deploying clean, cheap and reliable power in Australia. The second, and much bigger problem, is our liberalised, energy-only National Electricity Market (NEM) and the out-of-market subsidies that provide additional revenue to solar and wind generators. Dr Kerry Schott, the chief advisor the Energy Security Board (ESB) recently confirmed this in an article in The Australian. Among other things, she confirmed that the NEM was not functioning to attract much needed new investment in “always on” power generation. Despite high power prices and a need for investment in “always on” generation, our NEM market design will not support NPP investment[1].

For all their desirable attributes, a NPP involves a large, upfront expenditure to build the plant (CAPEX) and a long development period without revenue from sales. For simplicity, let us assume that the developer can access construction finance for a reasonably low rate and that the project delivery team are world class (no cost or schedule overruns). Let us also assume that modern small modular reactor (SMR) designs do result in faster, cheaper, and more predictable project delivery. So, in a market with high power prices, what else does a NPP developer need to make an investment decision?

Simple: The developer must know in advance that for at least the first 20 years of operation (preferably longer), the NPP will sell most or all its electricity for a given price. Because of the size of the investment and its time horizon, NPP developers cannot justify investment wholly exposed to merchant risk – the investment must be underwritten by contracted future production. This is the only way that any investment of this nature can be sanctioned, including LNG plants, petrochemical plants and any other capital-intensive utility or manufacturing facilities.

Of course, contracts that underwrite large CAPEX investments are more complicated than described above. Usually the “fixed price” is actually a price range that includes a ceiling to protect the buyer and a floor to protect the developer. Also, one developer may require as little as 70% of nameplate capacity be sold in advance, accepting merchant risk (spot price) for the other 30% whilst another developer may require that 100% of production is pre-sold. Various contractual mechanisms are used to protect both parties from credit risk, project risk, exogenous risk (i.e. future transmission constraints), regulatory risk and poor operational performance. Because the investment is fully or substantially protected from market risk, the contract price of the power can often be discounted to prevailing market rates as the risk premium implied in the hurdle rate can be reduced.

There are also obvious benefits to the buyer including long range price stability which may be needed to underwrite their own capital investments or safeguard operational viability (think steel and aluminium smelters).

As current generation capacity retires and provided there is a willing buyer, investments of this kind could make sense in markets with low price volatility, stable energy policy and well established, unchanging regulatory frameworks; none of which can be said about the NEM.

With regards to a privately funded NPP investment, indeed any large investment with a long project duration, the NEM has deficiencies which need to be addressed.

Note: This is not a criticism of the Federal Governments recent threats of market intervention, including building a combined cycle gas plant in the Hunter Valley. Unfortunately, these interventions are justified.

Of course, when average power prices get very high, some investors will be lured into the market despite the high volatility. Unfortunately, though rationally, these higher-risk investors have short time horizons and favour low upfront costs and quick deployment, even if they incur higher operational costs. Further, the technology must be optimised to take immediate advantage of high prices without being exposed to low or negative prices a few hours later (when the sun comes up or the wind begins to blow). This is one reason for the proliferation of small-medium, fast start open cycle gas turbines and reciprocating engines within the NEM, despite high gas prices. Even with high average prices, a high volatility market cannot support large private investments with long time horizons, nuclear or otherwise.

Another consequence of high price volatility is increased financialisaton[2] of the power sector, though the impact to power prices is difficult to quantify. I will cover this in a future article.

Provided their production is not curtailed, solar and wind power generation assets can access additional revenue that, under current law, would not be extended to a NPP should the nuclear ban be lifted. These payments take the form of large generation certificates (LGCs) which, under the Renewable Energy (Electricity) Act 2000, liable entities (electricity retailers) are obligated to regularly purchase. These provide renewable generators with an additional $30 – $40/MWhr.

The result of this policy, indeed its very intention, is that investment for at least a decade has been nearly entirely focused on capturing these out-of-market subsidies – implications for system-level costs of electricity be damned!

Given their very low operating costs and non-existent availability obligations, this means that renewable generators can and do bid into the market at rates close to $0/MWhr or even negative because they receive guaranteed out-of-market revenue.

The Government has confirmed that this program will be ramped down as planned but the calls for its expansion and perpetuation may prove difficult for the PM and Energy Minister to ignore.

The Value of Availability and Dispatchability

The NEM is what is referred to as an “energy only” market and, like its Texan counterpart, ERCOT, was conceived at a time when all sources of power generation, regardless of fuel type, had similar operating characteristics including availability and dispatchability. Because these qualities were intrinsic to all generators, there was no need to value these attributes separately nor much need to worry about short-run adequacy of supply.

Things began to change as the portion of intermittent renewable energy began to increase. Primarily because of their very low short-run marginal costs (and assuming no transmission constraints), renewable energy generators receive priority dispatch when they are available but have no obligation to maintain supply. Largely at the mercy of the market and the weather, network operators must quickly and at any price, find and dispatch alternative generation when renewable generators exit the grid to meet demand for electricity or blackouts will ensue. This scenario happens daily and usually results in periods of elevated prices as fast start, open cycle gas turbines (OCGT) are brought online. This is the very real cost of intermittency[3], which is not borne by renewable energy investors, but by energy consumers.

So, if intermittency has a cost, does it follow that availability and dispatchability have economic value as characteristics of energy? Preeminent historian of energy, Vaclav Smil seems to think so. In Chapter 7 of his magisterial Energy and Civilisation: A History, Smil states

I have found that the value of constantly available energy is so obvious that non-technical people intuitively grasp it, though they often do not think about it or bother how the “miracle of the grid” is achieved[4].

In a collaboration with the Nuclear Economics Consulting Group, DUNE prepared a submission to the Energy Security Board (ESB) which outlined an alternative market structure that aligns incentives towards dispatchable, high availability generation technologies (or combinations thereof). Very simply, our proposal is for separate markets which use reverse auctions for “always on” and “intermittent plus firming” supply which are roughly proportional to the baseload and variable portions of the grid’s daily load profile and I will describe this proposal further in a future article.

Of course, there are already various measures used in other power markets throughout the world to incentivise availability and dispatchability. These include capacity markets, out-of-market capacity payments and others.

Regardless of the market design, no NPP (or other “always on” technology) will be built in a grid that does not confer a value to these critical attributes without which our modern, high-energy society would not be possible. In fact, there is not much incentive to properly maintain our nation’s existing “always on” assets.

If DUNE or others are ever to be successful in deploying nuclear energy in Australia, there are many obstacles that will need to be overcome and the investment case, for the investor and consumer alike is foremost among them. Simply pointing to low power prices in nuclear nations like France, Sweden and Ontario (Canada) and assuming the investment case will follow because of elevated power prices in the NEM does not recognise that the current design of the NEM will not support an NPP investment decision regardless of how high average power costs get.

But this realisation begs a further question; if a power technology is zero-emissions, unquestionably safe, “always on” and has very low operating costs and a very long operating life, why can’t an investment case be made in a market with internationally high power prices? Is it a problem with the technology or the market design?

Over to you Dr Schott.

[1] A strong argument can be made that electricity supply is not improved by the application of certain types of market structures (such as those found in parts of the US, Australia, UK etc.) and that reconfigured Government utilities may achieve better public interest outcomes; however, I will leave this for a future article.

[2] Financialisaton in this context describes the rise of market instruments (also referred to as synthetic) and trading activity as a layer on top of the infrastructure. Power systems can be effectively operated (though not always efficiently) without the layer of market instruments and energy trading. The market instruments and trading activities are not required for the supply of electricity and impose an additional cost. If this additional cost is less than the efficiency improvements achieved through the introduction of the market, then financialisation can be beneficial.

[3] Levelised Cost of Electricity (LCOE) quantifies the all-in cost of power at the generating station’s metering terminals, minus capital recovery. LCOE was a useful metric to assess the cost competitiveness of a generation technology when all generators had similar availability and dispatchability attributes. With the rise of intermittent renewable energy which does not have these attributes to the same degree, LCOE has become a meaningless metric (the proverbial comparison of apples and oranges). However, LCOE is still often used by renewable energy advocates who point to the very low LCOE of wind and solar when claiming renewables are now cheaper than all other sources of power. Serious energy policy now uses System Levelised Cost of Electricity (S-LCOE) to reflect the costs of intermittency and other externalised costs of renewable energy not borne by renewable investors.

[4] Interested non-technical readers should refer to Meredith Angwin’s Shorting the Grid which is the best non-technical description I have read of how network operators ensure grid availability of greater than 99.99%.

Why don’t we demand Zero Emissions Always On Affordable Power