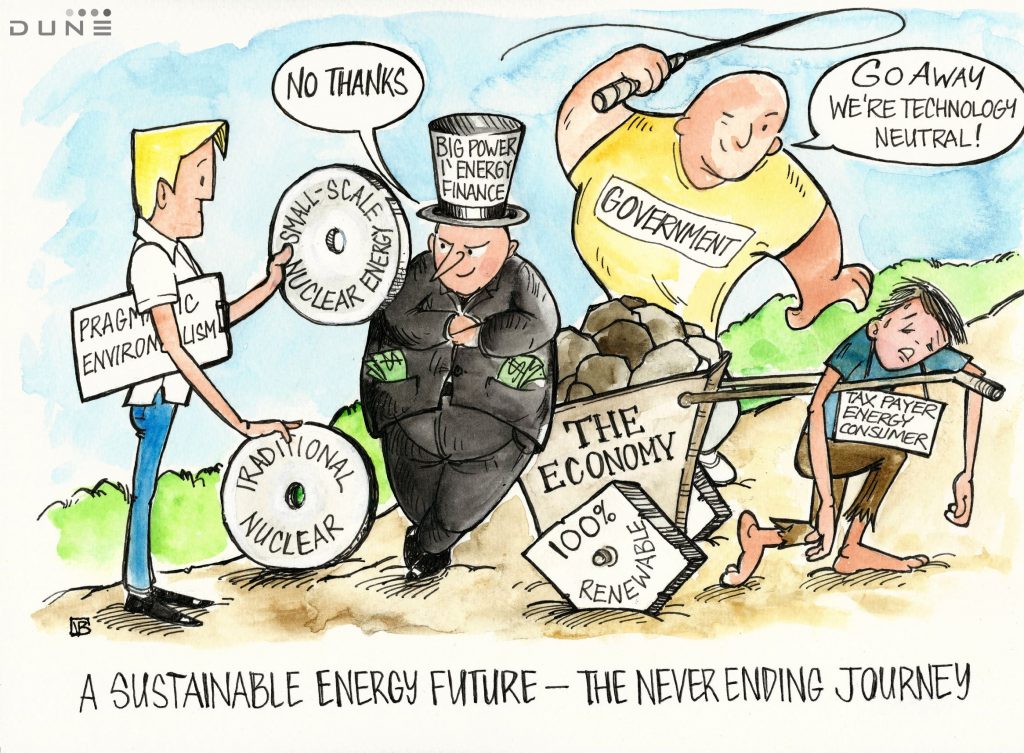 Angus Taylor has an inquiry going into dispatchable energy and storage options for electricity production. The terms of reference suggest the need to enable Variable Renewable Energy Sources (VRE) such as wind and solar to be integrated into the National Electricity Market (NEM) in a dispatchable or usable form.

Our analysis of AEMO’s Integrated System Plan (ISP) out to 2042 and ultimately to a decarbonised electricity sector demonstrates that a system based on nuclear energy will have much lower costs and achieve carbon reductions more quickly. It will achieve these cost benefits in part by eliminating the need for large amounts of energy storage and the expansion of the existing transmission and distribution system.

Our submission to the inquiry directly compares the costs and emissions profiles of such an integration with those of a nuclear energy based system. The headings in this article address some of the key terms of reference.

There are a great many scenarios that make up AEMO’s Integrated System Plan 2020. For brevity we quote the current and future electricity demands in 2042 as follows:

The total demand in 2042 will form the basis of comparison of VRE and Nuclear energy-based systems. Many of the remaining AEMO ISP scenarios could be compared however the relative benefits of nuclear energy will remain.

From GE’s promotional material this plant’s benefits are: 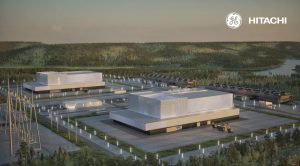 General Electric are focused on ensuring the BWRX 300 is cost competitive in the very tight North American market where shale gas prices are making other generators uncompetitive. The cost sensitivity is shown in Figure 3 where the BWRX 300 has a significantly lower levelised cost of generation than other nuclear power plants and is on a par with shale gas generation and renewables. 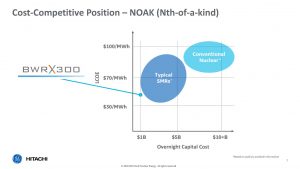 Comparative efficiency, cost, timeliness of development and delivery, and other features of various technologies

The comparative analysis of renewable and nuclear based systems is shown in the charts in Figure 4 and Figure 5. Both comparisons shown are based on the costs for wind, solar, batteries, pumped storage and fossil fuel generators derived from CSIRO Gen Cost 2020-21. The cost for nuclear energy is based upon the publicly available General Electric (GE) anticipated cost adjusted for deployment in Australia.

For the purposes of this comparison we have used a capital cost of A$4,580/kW for the GE BWRX 300 small nuclear power plant. Further significant gains are also made in the staffing levels and so the operational values used are A$8.47/MWh for fuel and A$16.72/MWh for operations.

Figure 4 utilises CSIRO costs in 2021 for each technology. Much is made of the future anticipated cost reductions for batteries, solar and wind technologies. These reduced values are reflected in Figure 5. While the costs of a fleet of small nuclear power plants would also decline with time, this has not been assumed in our comparisons.

Six energy plans are shown in the charts. Each energy plan has been run through the Electric Power Consulting’s Energy Model. The model matches a mix of energy generators and storage devices to meet the demand on the National Electricity Market (NEM) which uses about 199TWh/year.

It contains demand data for three consecutive years from 2017. The demand is measured at half hour intervals.

Inputs into the model include:

Using these inputs the model derives the System Levelised Costs of Energy (SLCOE) and energy prices to wholesale and low voltage retail customers.

The model also calculates the actual shares of energy for each generator, capacity factors and costs of carbon abatement.

Description of the six energy plans:

Both the 2021 and 2042 CSIRO cost base scenarios, plus our assessment of the GE plant, show significant cost benefits when nuclear energy is included in the mix compared to systems based on exclusively on variable renewables. These results are consistent with a recent OECD[i] study of the Texas ERCOT (Electricity Reliability Council of Texas) system. This highlighted the impact that variable wind and solar have on electricity system costs and the cost of the extra backup generators, costly transmission lines and excess capacity required.

In particular, the plan which deploys 76% of nuclear energy is the least cost and eliminates all fossil fuel combustion. Its minor emissions of 22 gr CO2/kWh are derived from embodied carbon in the construction of all the generators.

System Management – a grounding in reality

The use of nuclear energy on the NEM would provide a system free from the consequences and complexity of juggling a variable renewable system with all attendant storage and ancillary services costs.

Figure 6 shows the interaction of the generators and storage required to meet the load. The nuclear power plants are running at high and economic capacity factors of 84% and are meeting the base load power demand. During the daily cyclic demand, a combination of the existing hydro plus solar and storage are meeting the load. The option exists to substitute open cycle gas plants for some of the storage at a modest overall emissions intensity of an additional 10 – 20 gr CO2/kWh.

This system has precedent – it’s very similar to that deployed in France for the past 30 years and has created amongst the lowest cost energy systems in the EU. France built 63 GW of nuclear energy over a 22 year period. Their Generation II plants had a materials intensity at least double that of the modern BWRX 300 plants. In effect Australia, with only 23 GW of installation, would be set with a construction project consuming about 20% of the effort made by France in the 1970’s to 1990’s.

Only a massive loss of confidence would prevent Australia from doing the job in one or two decades.

In Figure 7 and Figure 9 we see examples of the complex juggling act required to manage systems dependent on variable renewable energy with storage. In figure 8 we see the large amount of surplus solar that is “spilled” under VRE systems. It’s highly variable occurrence on a daily basis means its use in hydrogen manufacture is problematic. In figure 9 we also see the problem of managing coal plants with high levels of solar. These will have vacated the market long before this type of operation is attempted.

Under the current NEM market structure no investment in base load generation or even large scale pumped hydro storage will take place without Government intervention. Therefore to enable Australia to have a low cost, low carbon electricity system will require mechanisms to be put into place that guarantee a return on investment and ensure consumers are insulated from excessive financing costs.

Such a system will provide a large number of very highly skilled jobs and stabilise local communities. It will provide a massive lift in the levels of education and security to regional Australia and along the way it eliminates carbon emissions to the electricity sector.

[i] THE COSTS OF DECARBONISATION: SYSTEM COSTS WITH HIGH SHARES OF NUCLEAR AND RENEWABLES, NEA No. 7299, © OECD 2019