Western Australia is our largest state with a land area of 2,529,875 square kilometres. It has around 2.6 million people, or 11% of the national population. With its  small isolated population and without any grid connection to the remainder of the nation it has unique challenges in establishing low carbon generation

Ninety two percent of the population is concentrated in the south west corner where they receive power from the South West Integrated System (SWIS).

The state generated a total of 40.5 TWh[ii] of electricity in 2017. Approximately 18.7 TWh of electricity[iii] or about 59% of the state’s total was delivered in the SWIS. The total for the NWIS is taken as being 3.5TWh[iv]

The remaining 18.3TWh is assumed to be generated by off grid sources and industrial processes but is not properly accounted for at this stage.

Peak and Minimum demands are:

In the SWIS is about 91% of electricity is generated by fossil fuels with coal at about 50% and gas at 41% while in the NWIS the fossil fuel amount is closer to 99%.

The load on the SWIS is too low to support a traditional 1000MW large scale nuclear power plant. 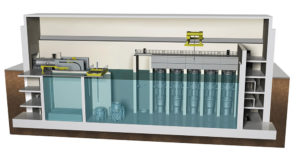 Clearly a small self contained grid such as Western Australia’s is suited to smaller reactors in the sub 300MW class such as the proposed NuScale SMR’s. They would overcome the impacts of refuelling or reactor trips and would mean that the grid would require less extensive upgrades and energy storage can be avoided.

Currently one of the more advanced reactors being proposed and closer to licensing approval is the NuScale 360MW SMR which consist of 6 x 60 MW units. The 720MW version using 12 x 60MW units would also be an option. These plants would provide a very flexible energy generator that could also load follow.

Regions of Interest for locating these plants in Western Australia

Regions of Interest for Small Modular Reactors in Western Australia 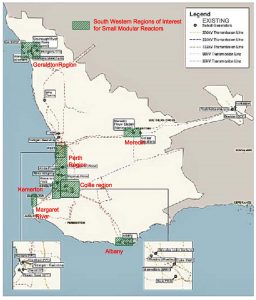 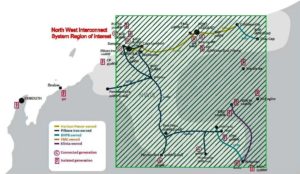 In Western Australia coal fired plants were constructed adjacent to available coal mines and other infrastructure.
New nuclear plants will where possible take advantage of the resource used for cooling at these plants.
In an effort to reduce the environmental impact upon inland water resources, modern nuclear power plants are being designed to use a hybrid system of air and water cooling. During periods of low water availability the degree of air cooling can be increased though at a modest reduction in power output.
At coastal plants such as those in the Geraldton, Perth, Pilbarra, Margaret River and Albany regions, sea water would be the sole form of cooling.

While recirculating systems don’t add heat to the river or lake, they do consume water through evaporation. In Western Australia the availability of sizeable inland rivers are limited and so to overcome issues surrounding temperature rises in inland locations  mechanically driven systems known as  hybrid and recirculating systems can be used. These are now the only option used in the United States under their EPA guidelines.

I am test text for Image with text shortcode.