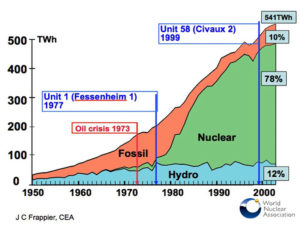 The Imperative of Climate Change action

Nuclear Energy must be the centrepiece of Australia’s Low Carbon Future if we are to address manmade global warming and decarbonise our economy. A prompt reduction in carbon emissions and the need to replace ageing coal plants requires the reactor program to commence within 10 years.

The priority of the Australian Nuclear for Climate project is to promote the near term deployment of nuclear energy. Although innovative and promising reactor technologies are under development e.g. fast spectrum, thorium fuel, small modular, molten salt, high temperature gas, nearly all of these advanced concepts require further detailed development in nations with a mature nuclear industry and expertise. It would be advisable that Australia not be a pioneer with a new technology for its initial step into nuclear power generation. The first step is a major leap when one considers all of the infrastructure that needs to be in place for construction and operation of a nuclear plant—a new technology will simply add to the development process.

For Australia the requirement is to use a safe, proven reactor technology with low financial risk. Such a reactor will enable the culture of safety and confidence to be developed that is essential for the nuclear fuel cycle. It would also help new industry and jobs to develop because they would be engaging with known technologies and commercial realities rather than developmental ventures.

For this reason preference is given to those reactor designs that are currently being deployed. The use of larger reactors would be complimented by Small Modular Reactors (SMR’s) such as that shown in by NuScale or Westinghouse or Generation IV reactors being used as and when they become available. The option of Small Modular Reactors will be investigated provided those reactors are sufficiently advanced in their licensing and deployment. For the purposes of decarbonising our economy we must remain focused on real and achievable goals.

SMR’s as currently envisioned have the advantage of being able to operate over larger extremities of the existing grid without significant upgrades and costs being incurred. The study should identify suitable sites for SMR’s.

There is a case that public acceptance of nuclear energy in Australia might be easier if the first reactor was an SMR but this class of reactor might not produce electricity more cheaply. Further, its business plan is reliant upon large scale factory manufacture with a significant order book and with less Australian content than larger scale reactors.

Focusing on the Reactor type

Reactors that are currently being built and/or exported around the world are the:

The initial scoping of the Australian Nuclear for Climate Project will reference the Westinghouse AP1000 with its electrical capacity of 1117MWe and the companion Westinghouse SMR with its capacity of 225MWe. Referencing the AP1000 is based upon its recognised design merits within the Chinese and US markets, its current design approval in the US, Europe and China, its lower generating capacity and ready acceptance of US technology within Australia. This does not exclude other designs with similar power output.

Its clear however that large reactors will not fit the needs of States such as Western Australia, Tasmania or Queensland with their smaller populations, low capacity grids and isolated populations and activities. Australia will therefore have a mix of SMR’s and Large reactors.